It’s been cold in Seattle lately. Not Minnesota cold, or Canada cold, but pretty cold for us. An awesome thing about cold weather in Seattle is that we can see all those gorgeous, snow-covered peaks that hide behind the clouds most of the winter. The other thing it means is that all those muddy trails freeze, and the forest takes on a new aura: no longer dripping and dark and mysterious, it becomes bright and sharp and gives me the sense of living things just waiting for warmth to wake up again.

This weekend my friend Christy and I headed out for a planned 24-mile run on the Middle Fork Trail, which runs alongside the Snoqualmie River, and discovered a wonderland.

We pulled into a frost-covered parking lot around 9 a.m. and were on the trail by 9:15. The trail is accessed by a beautiful arching bridge over the Snoqualmie River, and it was covered in layers of frost. The trail then noodles its way upstream, sometimes up, and sometimes down, through many little drainages, winding through the forest, always offering beauty along the way.

We marveled over the many microclimates we ran through—gloves and hat on, off, on, off, and so on, throughout the day. Sometimes we were surrounding by green, and other times the world was white with frost.

Ice curlicues that grow out of the mud were everywhere in the frosty sections.

We enjoyed venturing through the changing forest, and marveled over how there would be distinct boundaries marking areas of frost. Then we were surprised to find the world encased in ice.

We speculated at length over where the ice came from—frost that melted and then refroze? last week’s rain shifted to sleet as the weather changed? It became a v-e-r-y slow mile or so as we hoped the ice would end and we could continue our run, and then became a photo session for me as I went from discovery to discovery. 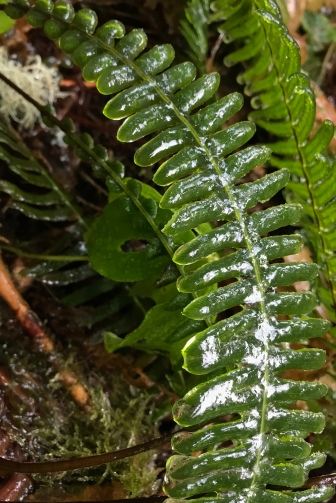 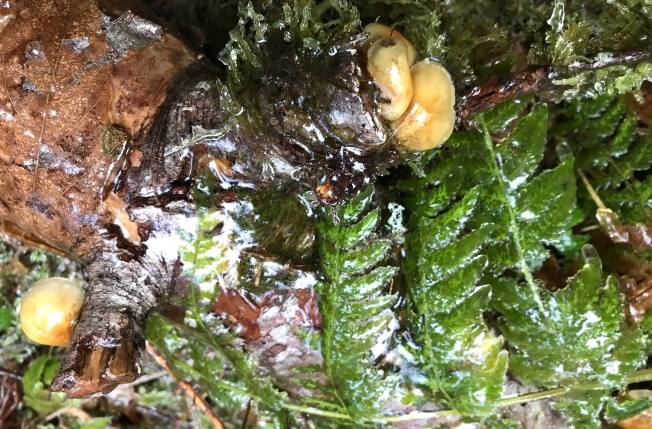 We gave up when we reached the log bridge just before Goldmyer Hot Springs.

So back through the ice field, and then back up and down, noodling our way along the river and through the woods.