The weekend before last was supposed to be my big training push before a race at the end of the month, but I was sick and decided to rest. This was a very hard thing to do when I already had nerves building about the upcoming race. Taper was to begin after, and I found I couldn’t wholly commit to the taper without at least one more longish run under my belt.

Luckily, the Pacific Northwest is having one of the Octobers we all dream about: intense fall colors, glorious sunshine, and insane views of nearby peaks all clamor for us to get OUTSIDE! So I did.

I decided to pick another gem from the UltraPedestrian Wilderness Challenge route menu, this time going with the Chinook Pass Loop. This loop starts at Chinook Pass on Highway 410, using the Naches Loops Trail to connect with the Pacific Crest Trail, and then travels along the PCT through the William O. Douglas Wilderness for about 10 miles. It then hangs a right on Laughingwater Creek Trail, descending over 8ish miles to Stevens Canyon in Mt. Rainier National Park. From there, it’s all uphill on the Eastside Trail to get back to the car.

I hit the trail just as the sun was rising. It was just below freezing and a breeze was blowing … brrrr! I’ve been heat training and this was definitely the anti-heat-training experience. Mt. Rainier was awash in the pink of alpenglow and I kept stopping to take pictures and then reminding myself that I had a ways to go and needed to get moving. 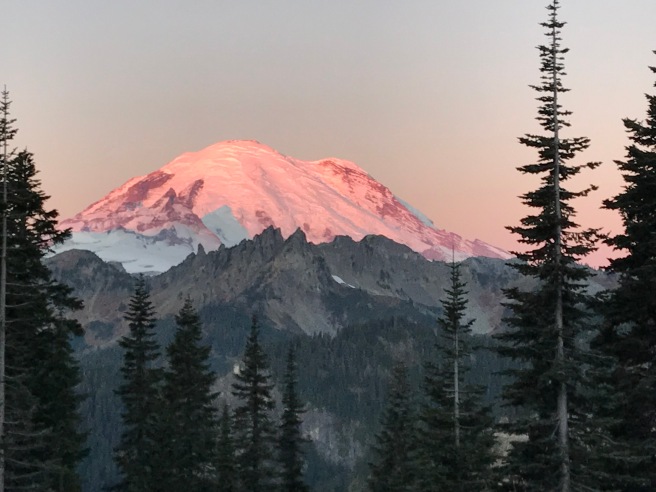 Shortly before I hit the intersection with the PCT, I encountered two women who had hiked to Dewey Lake early to watch the sun rise from the lake. What a great idea! They said I was the only person they had seen out there, and indeed I would see nobody else until I reached Laughingwater Trail.

While the PCT is generally gently rolling with some ups and some downs and some sorta levels, I had a hard time getting going. I think the two weeks’ worth of a cold were still hanging around, and breathing in the cold air wasn’t very easy. I finally hit a groove after a couple of hours, and I think that bleepin’ cold is finally gone.

The PCT here is amazing! I could imagine it can be blazing hot in the summer, but much of it is open and I had frequent views of Mt. Rainier and later Mt. Adams and Mt. St. Helens. The mountains are transitioning seasons, and while I still had sections with blazing reds and oranges I could sense that the land was quietly waiting for the snows and restoration period of winter.

As I rounded a corner shortly after the second junction for the trail to Two Lakes, I came upon two horse packers/hunters … the second set of people I’d see on the trail. We chatted briefly, and I later realized I could easily have been mistaken for a deer or elk and wished I had worn brighter colors. (Knowing I’d be in the national park for much of my run, I hadn’t really thought about hunters. Note made.) They had just come up Laughingwater Trail, so they headed wherever they were going and I headed down … down … down for the next 8 miles.

Laughingwater Trail is a joy to run. Aside from the upper quarter-mile or so, where it was icy, it is that kind of soft, plush forest trail that just encourages you to let go and fly! It was nice, too, to be able to let my body relax and spend some time reflecting. You see, when I was a kid, my mom and I were in this community group through the Y where we had nicknames; my mom was Laughing Waters and I was Bubbling Brook. My mom passed away a few years ago, but October 11 would have been her birthday, so I felt like she was close to me as I ran down this trail that held one of her names.

Soon enough I began hearing the cars on Stevens Canyon Road. I popped out of the forest, crossed the road, and headed toward Eastside Trail. All of a sudden I began seeing people, with several national park visitors enjoying Silver Falls. I stopped to enjoy it too; I’m not sure how, but I had never made it there before.

After a short mile, I reached Grove of the Patriarchs. When Ana (aka Will Run for Whisky) and I did the Owyhigh Loop last year, we skipped the trip through the Grove because it was a busy summer weekend and the line to cross the suspension bridge was long and slow. While there were 20 or 30 people at the Grove, this time there was no line for the bridge, so I got in my loop around the old and huge trees. I have to confess, I was a bit disappointed. I think the trees along the lower part of Eastside Trail are nearly as big, and the setting away from crowds is prettier. (I didn’t see anyone after Grove of the Patriarchs.)

From the Grove, it was a little under 6-1/2 miles to Deer Creek camp. This section of trail is one of those obnoxiously runnable uphills … so I alternated between trotting along and power walking as I wiped away spider webs (apparently the spiders are still quite busy in the lower elevations!). I had a lot of fun checking out all the mushrooms, which were everywhere, in all sorts of colors and sizes. 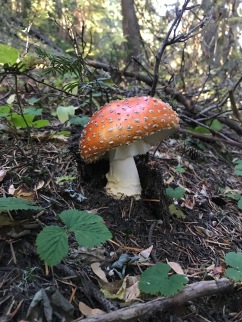 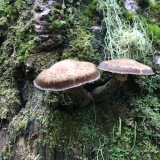 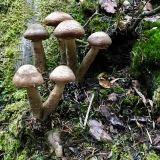 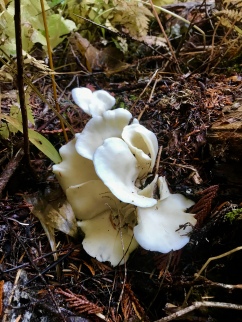 Just past Deer Creek, before the junction of the Owyhigh Lakes Trail, a small bridge crosses a stream just in front of a small waterfall. I had plenty of time left in the day, so I sat in a patch of sunlight and just let my body and my mind be still.

I’m really not sure how long I was there, but the sunlight went away and I realized it was getting cold again. I had been told that the final three-mile climb up Eastside Trail was stiff, but I tell you what else it is: a sucker climb! The first mile and a half are gentle, as they noodled uphill and lulled me into thinking I had been misled. Ha! All of a sudden the incline angles upward, and indeed that last bit is stiff. 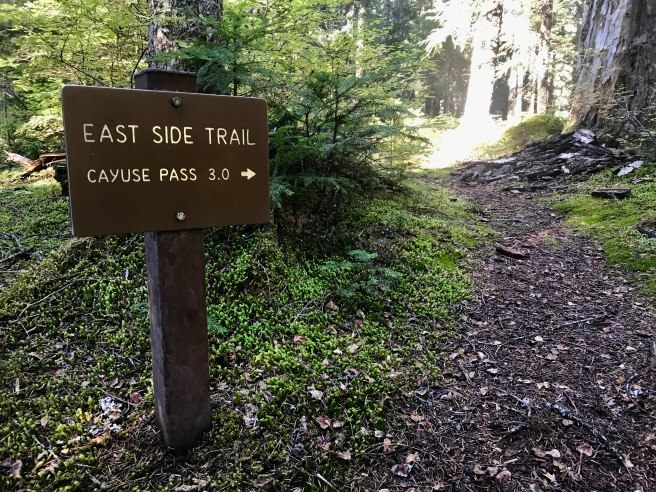 Soon enough I crossed Stevens Canyon Road once again and made my way up the final mile and a half to Tipsoo Lake and my car.

One thought on “Chinook Pass Loop: An UltraPedestrian Wilderness Challenge”

Paddling the Deschutes River with #myabbykat. 💕