It’s after midnight on a Monday night. I’ve been working for the past three hours and just realized what time it is. It’s been a long time since I’ve fallen into my work like that, where I’m fully engaged and energized intellectually that way.

It’s no secret to those close to me that I struggle with what I call my multiple identities. Lately I’ve been ramping up the training again for some runs at the end of July and again in late October. But I’ve been missing being with my family. And I kind of miss mountain biking. And I’d love to have time for a pedicure. And I definitely miss time with my hubby. 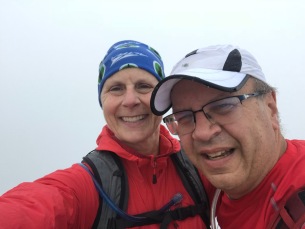 We used to do stuff like that all the time. When I first moved to Seattle to be with him, he introduced me to all the standards—Si, Tiger, Granite, Mailbox—and to a bunch of the classic area alpine climbs—The Tooth, Chair Peak, Ingalls. Then I got tired of humping a heavy pack full of gear through the mountains so we took up scrambling together. One summer, almost every weekend we opened the guidebook to local scrambles and picked an adventure. That was a fun summer!

The other thing that’s no secret to those close to me is that I struggle with depression and anxiety. That’s the shitty part of life. Sometimes it’s hard to be excited about family, or making progress on anything. Sometimes it’s hard to be enthusiastic about going on adventures: they somehow get twisted in my brain and become have-to-ventures instead of want-to-ventures. It gets harder to deal with people, to be with big groups of people, to engage, to even enjoy what I’m doing.

My big goal for the summer has been to do the Wonderland Trail around Mt. Rainier in three days. The trip kind of germinated last year from separate seeds that came from separate conversations among different members of my trail running circle. We ended up with nine women signed up and committed to the trip—which in my spiraling state this season was just way too many people: too complicated, too many conversations, too much planning, too much gear, too much anything and everything.

Trust me, I love each and every one of those women dearly. I was simply overwhelmed.

I had a lot of conversations with Mike about what to do: Should I just bail? I wasn’t having fun getting trained. I wasn’t having fun planning. Mike—being my rock—kept me centered and encouraged me. He reminded me that once we were past all the planning and getting on to the doing, I’d be in my happy place again.

And so it was that on Monday, July 30, my friends and I—down to seven from the original nine due to life getting in the way—started out on the Wonderland Trail. That’ll be the topic of my next post. But I wanted to finish this post, which was started a few weeks ago, because it’s part of the story.

About six months ago, my cousin Chris asked me to write a post about the why of ultrarunning. Why do I do it? What do I get out of it? It’s definitely not something that’s easy to answer. But I think part of it starts here: for me, it gives me an anchor. It’s something that comes from me that’s a fighter, that’s strong and determined, something that has purpose, a goal, a direction. And that takes me to beautiful places away from the everyday life: to places that inspire and feed my soul and teach me that I can be OK.