This weekend I teamed up with five awesome adventure buddies for back-to-back days in the mountains of Olympic National Forest and Park. Day 1 was designed by a coach two of the women work with—so the rest of us were just tagging along for fun —and Day 2 was a repeat of Heidi’s birthday run route of a few years ago. Both days took us to beautiful places, so be ready for lots of pictures!

Sarah, Wendy, Heidi, Meredith, Nina, and I caravanned to the trailhead for a chilly 9 a.m. start. After our warm and sunny summer, it was weird dig out the jackets and gloves again.

The trail starts out much like Lower Dungeness, rolling and gently up through the forest, along the river, through carpets of green moss and elegant evergreens.

Our route directions told us to hang a couple of rights on unmarked trails at about 3.3 miles, and then make our way across the river on a log jam to find a boot track that would take us to Goat Lake. We missed the logjam and ended up wandering around a bit at Camp Handy—where we walked through the season’s first frost—but we finally found the way. 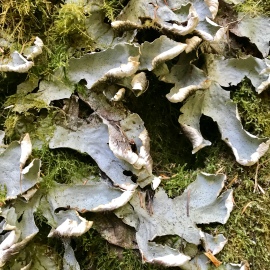 The climb up to Goat Lake is stiff: steep, unmaintained, and unrelenting, with roughly 3,000 feet gained in around 2 miles. I think it made a record for my slowest mile ever! It’s a bit of a blur of up-up-up, with some funky bushwhacking, some loose sandy stuff, some rocky stuff, some climb over trees stuff, and a few false summits. 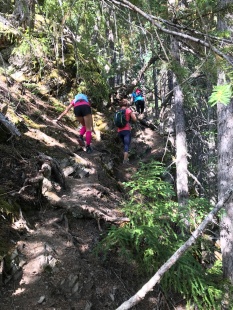 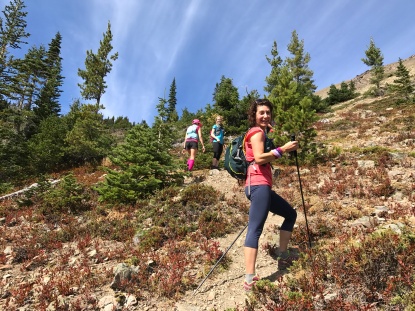 The way down was a hoot and fast, and next thing we knew we were bushwhacking again to get to our log crossing. The plan was to continue up the trail to Marmot Pass for some more climbing, and Heidi, Wendy, and Meredith made the trek. (I hear that from Marmot Pass you can see out to the Sound, and a look at the map tantalizes with more mountains and trails to explore. Next time, definitely!) Nina and Sarah hung out and explored Goat Lake a bit and then headed into Port Angeles. I went up toward Marmot Pass a couple of miles, but just wasn’t feeling the mojo and turned around. Since I knew I’d have a long wait at the car, I puttered along, taking photos and enjoying the solitude along the river.

It was chilly by the time Heidi, Wendy, and Meredith reached the car, and they were thrilled I had the seat warmers on and the heater blowing. We munched on some Superhero Muffins and Cokes before packing up and heading back Highway 101.

We tracked down Nina and Sarah at the Next Door Gastropub in Port Angeles (yum!) and then went straight to our uber-functional and -utilitarian motel, showered and zonked for the night.

After an early start (haha—actually on-trail time was 11:10 a.m. and Strava labeled it as a “lunch run”), we were off exploring again. We were supposed to meet up with our friends Lisa, Sharon, Belia, and Carol at 9:00, but they wisely chose to leave without us. We went counter-clockwise, which based on chatter on Seattle Mountain Running Group recently is the way just about everyone out for the day goes.

A short mile of rolly stuff takes you to Sol Duc Falls and the turn off to Deer Lake Trail. It’s about 3 miles to Deer Lake, and while you climb consistently the gain is only 1,600 feet so you can keep a nice pace. The lake is so pretty, but with our late start we were on a mission and kept going, now on the High Divide Trail.

There are a few little tarns above Deer Lake, and as we passed one tarn a group of five backpackers resting beside it said, “Hi,” and one said, “Hi Mom!” Amazingly, Wendy’s son was among the group—neither knew the other would be on the trail that day—and it made for a happy but brief reunion before we continued on.

As you get above these tarns, the terrain becomes more alpiney and the views continually more breathtaking. High Divide Trail traverses up, first to the intersection with the Seven Lakes Basin Trail 3.3 miles after Deer Lake (last time I was there, we took this turn and feted Heidi’s birthday at Lunch Lake) and then Bogachiel Peak about a mile later (where you can do a quick detour up for more views). We skipped both in the name of onward progress and the hope that we might catch up with the other group (but we didn’t), and especially as we had spent a lot of time distracted by the best of all trail snacks: The blueberries along High Divide Trail are ripe, and all of us—and everyone we met—had fingers and mouths stained purple from the berries. 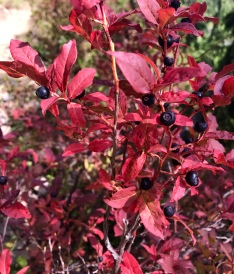 As we skirted above the Seven Lakes Basin on one side and the Hoh River Valley and Mt. Olympus on the other (wowowowowowow!), Wendy was out front and suddenly
shouted, “Holy shit! Look at that bear!” The bear, apparently flushed by a group of backpackers diagonalling up from the lakes and then further startled by us coming from another direction, was running, like a full-on gallop, except I don’t think bears gallop precisely. You know how they say bears are fast? Yup, they are! It was wonderfully exciting and so impressive to see him run! He crossed the trail some 100 yards in front of us. As we passed where he disappeared into the bushes, we all chanted “hey bear hey bear” just to be sure he knew exactly where we were.

Before High Divide Trail starts heading down around mile 10, there are some nice ups and downs with continued 360-degree wowowowow views.

As we turned onto Sol Duc River Trail, I was toward the back of our group because I kept taking pictures, and I spied another bear up toward the Cat Basin Primitive Trail. This one was a big one and looked fat and content munching on berries.

We regrouped at Heart Lake (truly heart shaped), filtered water, and then headed
down. From here, we followed a drainage and soon returned to the forest. The downhill was fun, with rocks and water bars that certainly kept me focused and fewer views to distract.

The last four miles of the loop are quite runnable—a delightful way to end the day. And as we neared the end of our trail and the intersection we had turned off on to Deer Creek several hours before, the evening sun illuminated the forest and seemed to put a spotlight on the warmth of the camaraderie we all felt from being with great friends on a grand adventure outdoors.

And then, suddenly, there were a lot more people on the trail and we quickly popped up into the parking lot. 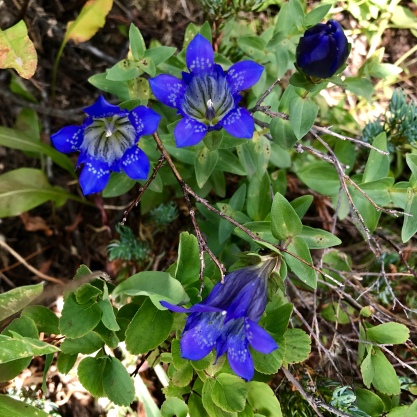 This was going to be a big year of events—rather than adventures—but pretty much everything’s been canceled. I’m hoping all the race organizations are able to hold on through the year because I’m planning to be back next year!