A few weeks ago, my friend, Ana, messaged a group of us looking for run buddies for several routes that she’d planned as part of her training for Mountain Lakes 100. When I saw the UPWC Owyhigh Loop on her list, I bit! I’ve been eyeing the UPWC routes and was eager for more exploration around Rainier—new trails, new views, new challenges! This route offered it all, and made for a wonderful long day on the trails.

For those unfamiliar with the UltraPedestrian thing, you can check out their Facebook page and read about some of the amazing adventures people have been doing locally lately. The Owyhigh Loop is a new UPWC route this summer and is made up of several trails that encompass approximately 36–40 miles and 8,000-ish feet of elevation gain of the northeast side of Rainier: Fryingpan/Summerland, Wonderland, Cowlitz Divide, Eastside, and Owyhigh Lakes trails.

We projected 12–14 hours for the route, and the forecast promised heat, sun, and smoke, so on Saturday I picked Ana up from her place in Seattle at 4:30 a.m. so we could get an early start. We were on the trail by 7, and started the 2,000-foot climb up to 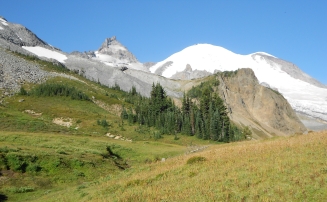 Summerland in relatively cool temperatures. This was my fifth visit to Summerland in the past few years, and it’s one of the few “touristy” destinations that I think really live up their billing. Unfortunately, this year we missed the wildflowers, but it’s always a breathtaking place.

A little higher we began to encounter a bit of snow and a few late-blooming fields of purple daisies. As we ascended to Panhandle Gap (elevation 6,800), we ran into more snow than I’ve seen up there before, but there was nothing challenging.

We quickly joined a group of five other scenery gawkers at the Gap. Mt. Adams took over the horizon and the expanse of Ohanepecosh Park spread out below us.

We took a bunch of photos, and then started the glorious descent through down to Indian Bar. Here, there were fields of purple lupine and red and magenta paintbrush still coating the hillsides and big, fat, bumbly bumblebees were in their own kind of heaven. There were several snow crossings, but again nothing difficult. The final bit down to Indian Bar features about a million water bars, but that’s OK because I didn’t mind slowing down to look around. Within a mile or so of Indian Bar, the trail winds through fields of blueberries, which made me wonder about bears, but I didn’t see any.

I was a bit ahead of Ana when I arrived at Indian Bar, so I found some comfy rocks near the water where I could refill my hydration pack and have a snack while I waited for her. It was a nice, quiet moment to relax and enjoy the view, but Ana abruptly interrupted my reverie as she came up and exclaimed, “Did you see that bear?!” Apparently there was a bear hiding in the blueberry bushes, but s/he was content stuffing him/herself and waddled off when Ana hollered, “Hey bear!” So Ana got the points for wildlife sightings. (I don’t think the bees count.) 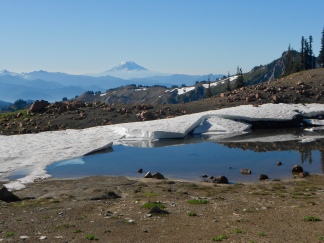 After Indian Bar the Wonderland Trail pushes up and out of the Ohanapecosh Park and then wanders up and down, and up and down, along a ridge. This was a busy section of the trail, with many backpackers looking pretty hot as they climbed up from Box Canyon on their way counterclockwise along the route. We leapfrogged two guys doing the full Wonderland Trail a couple of times, and passed few folks out for day hikes, but mostly just kept trucking along with the occasional stop to appreciate Rainier as well.

Just as you’re done with the ups and downs, you hit the intersection with the Cowlitz River Trail, where we started the 4-1/2 mile descent toward Eastside Trail and the Grove of the Patriarchs. Cowlitz is a nice change from the busy Wonderland Trail; we

saw only two other people on this section of the route, and the trail was less worn and dusty. However, I love it when I can let loose on a descent, but Cowlitz is not one of those trails; it was more Parkour course with trees still blocking the way in places, and parts washed out with rocky drops and grooves. And while it was nice to be in the shade after the climb out of Indian Bar, it became stuffy and a bit oppressive. By the time we popped out on Stevens Canyon Road, we were both feeling a bit beat up.

We found the connecting trail after a brief hunt (cross the road and turn right; it’s only 10 feet thataway), and made our way on the Eastside Trail past Silver Falls and up to the Grove of Patriarchs. A drinking fountain for easy water refills and another snack, and then we were off. Here we had a bit of a debate over whether the UPWC route required a lap around the Grove, and I’ve never been to the Grove so was eager to see the famous towering trees, but a long line to cross the one-at-a-time suspension bridge settled it and we headed back to the Eastside Trail. (We both agreed that we were a bit—OK, a lot!—tempted to stop and swim in the river like so many others were doing here, but sucked it up and kept on going.)

Eastside Trail takes you up about 1,000 feet along a little more than 6 miles of trail and is shaded the whole way—a gentle ascent reminiscent of the Siuattle River Trail we’d run earlier this summer. There are many pretty little creek crossings and waterfalls along here, but we saw only three people on this stretch of trail.

In an odd juxtaposition to feeling like we were out in the wilderness with still a ways to go, because the trail runs parallel to Highway 123 we were serenaded by distant Harleys, the thumbing of bass speakers, and trucks most of the way. By the way, Eastside Trail is a bit overgrown in places and lots of spiders are building their webs here, so watch out!

When we reached Deer Creek we refilled with water one last time and had a snack. We now had 2,000’ of climbing over 4.7 miles to get up to Owyhigh Lakes and the beginning of our final descent.

Much of this climb is in the woods, so there were few views, and we focused on steady onward progress. As Ana reported in her blog, my stomach had begun rebelling against the journey and the day’s heat, and I don’t really remember much about the climb except that I was pretty happy when it was over.

As we arrived at Owyhigh Lakes, we herd an elk bugle and I spied a small herd of elk wading in the larger, eastern lake. (Finally, points for wildlife sightings!) When I looked back a minute later, they were running south across the meadow and looked like a flickering film reel as they went in and out of the trees in the near-dusk light.

We took a moment to find our headlamps, knowing dark would come before we got to our car. This final section is 4.6 miles down 1,600 feet, and we were thrilled to find smooth, buff trail the whole way. I was pleased to run most of this, despite my unhappy stomach, and it went by quickly. Once we reached the road, we had an easy mile on pavement to the car.

As a post-note, everyone but the cat was sound asleep when I got home, and after a quick shower I slipped into bed with heart and soul full. The next day, my husband and I packed up the car and the kids for two days of car camping—and I have to say, that hammock was mighty comfortable!

Partly because we have the puppy and partly because my ankle has kept me away from adventuring, I've been spending a lot of time on the little half-mile of trails behind my neighborhood. I've been watching spring show itself in the daily evolution of the plants and trees as different things sprout or flower almost daily now. Today was the best—one of the early harbingers of spring in the mountains is the trillium, and I've been sad to miss witnessing its arrival on my usual trails. But today . . . well, check this out, observed just a quarter-mile from my front door!